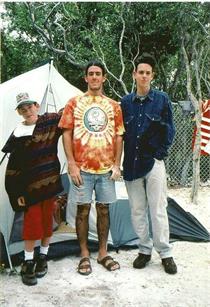 In memory of Casey and Dave Pease

For reasons that will become clear, I have chosen to tell you first about Brian, the youngest of my three sons. He could not have experienced a more horrific adolescence, and yet he continues to press on. I am so incredibly proud of him for what he has endured and how he continues to display courage in the face of unimaginable pain.

Brian was born when his oldest brother Dave was 8 and Casey, his middle brother, was 4. His first six years were happy and normal, competing with his brothers and desperately wanting to be older, to be just like them.

My wife and I divorced when Brian was 7 and it sent shock-waves through the rest of the family. Dave was 15 at the time and trying to find himself. He spent most of his remaining teen years looking for answers in a mixture of marijuana, cigarettes and alcohol. His drug use became evident over time and I butted heads with him constantly. In retrospect, I was good at confronting -- but not at addressing and solving the root problem.

Dave was bright -- extremely bright. We had lived in Holland his first year in school and he was judged to be gifted by the American School in The Hague. He was articulate and a strong debater, and resisted all our attempts to reason with him. I will always regret not having been strong enough to insist that he get help for his substance abuse problem. His mother and I had tried on many occasions but Dave protested vehemently and dug in his heels. We just never fathomed that his need for a buzz would lead him to experiment with heroin.

Dave was now 23 and working in retail and Casey was 19 and attending college at the University of Connecticut and doing well. Casey had just returned home for summer break on Memorial Day weekend of 1997. Having been born in Miami in 1973, while I was business manager for the Miami Dolphins, Dave grew up a big Dolphins and Miami Heat fan. The Heat had just won the NBA Playoffs, and Dave arrived home with a friend and a bottle of rum he had won on the series. They had a drink, toasted the Heat's accomplishment, and poked fun at Casey for being "Mr. College."

The phone rang at 4 a.m. the next morning. It was Stamford Hospital and the voice said, "Your son Dave is here and there has been an accident." She added, "Is there someone who could come with you?"  At that moment, I knew. I woke up Casey and we drove in silence to the emergency room. We were brought to a waiting room where a distraught young couple sat holding hands. They had been with Dave in New York City, and had driven him to the hospital. After about 10 minutes, a nurse arrived and asked me to come with her. As she led me into a nearby room, the hospital chaplain appeared and took my arm. In a split second, my heart, and my life as I knew it, had stopped.

The sight of Dave's lifeless body was jolting. I wasn't sure I could or wanted to take another breath. As a practicing Catholic, I instinctively whispered the Act of Contrition in his ear, asking God to accept it as if it were coming from Dave himself.

The hours and days that followed are still a blur. I learned Dave's friends had driven him around for hours before seeking help. They had been at a bar in the city and claimed Dave returned from a trip to the men's room saying he had just done some "stuff"t, felt weird, and then collapsed on the floor. They were afraid of getting themselves or Dave in trouble, so they carried him to their car and drove him back to Connecticut. These were wasted, precious minutes that likely would have saved his life had they acted more responsibly and sought medical help immediately.

Brian took Dave's death particularly hard. They had gotten very close the previous year, playing guitar together, talking about music and rooting for the Dolphins. Casey stepped in and played a major role helping Brian get back on his feet.

Two years later in 1999, Casey graduated from UCONN as a New England Scholar and began a career as a computer consultant. In June of 2001 he hosted Brian and me to a Father's Day lunch. He had recently been hired full time by one of his clients and he felt flush and wanted to celebrate. I rejoiced in the role model he was becoming for Brian.

On Sept 9 of 2001, Casey and a dozen of his friends rented a van and a driver to go into New York to celebrate his 24th birthday. At approximately 8 a.m. the next morning, the Wilton police came to the house to tell us there had been an accident, and that Casey was in critical condition.

Brian could not bear the sight of seeing Casey so banged up. He sat in the waiting room and was comforted by Casey's friends, as word of the accident spread. It was then that we got some of the details: The van had returned to Connecticut in the wee hours and while most everyone slept, Casey sat up front and kept the driver company. When they arrived at the drop-off point in Stamford, again most everyone chose to sleep there. Casey decided he preferred to sleep in his own bed and left to drive home -- he never made it.

Casey had fallen asleep at the wheel, impaired from a night of binge drinking. He hit a tree and snapped a telephone pole that fell on his car. He was not wearing his seat belt. He had massive head injuries and two broken legs and. The report from the neurologist was grim. The extensive head trauma and swelling had pushed Casey's brain down into his brain stem, cutting off the flow of oxygen. They could not control the swelling and the damage was complete and irreversible.

Removing Casey from life support was a decision no parent should have to make, but I knew he would not have wanted to exist in a vegetative state. Casey died the morning of Sept 10th in our arms. The following morning, Sept 11, 2001, his mother and I were at the funeral home making arrangements when the World Trade Center was attacked. Within the hour, the rest of the world joined us in shock and disbelief.

It's been five years now since Casey's passing. A poem I wrote to him back then completes the rest of his story, a harbinger of an involvement that will occupy me for the rest of my days.

Did you hear me whispering?

It's okay to let go

we're here, we love you.

Within minutes you did

From deep within you found a way

First a finger, then an arm

Shouting out without a voice

Your bracing shoulders your only choice.

Years and years before your prime

Rising up one final time.

Gone from our midst but not our hearts

My world changed that last exchange.

A source of pride soon nullified.

As I struggle to engage

To live and work this embattled stage

I pledge to you and all that matters

To rise up in reply, your memory my staunch ally.

To ride the wave your life evoked

Counseling others to stretch their stride,

To enter each race and room with a smile

And with dignity and grace, enliven this shattered space.

Brian graduated this past December from Nova Southeastern University (where the Dolphins have their training camp) with a degree in psychology. I have been making good on my promise to Casey under the banner of Get a G.R.I.P America (Greater Responsibility In Parenthood), speaking to parent forums across the country exhorting them to learn from my mistakes and to:

Get a grip on the loak of denial

Get a grip on the need for their active, personal involvement in the life of their teenager

Get a grip on the signs of a drug problem

Get a grip on the real battle underway

Get a grip on the developmental assets

Get a grip on the job description of a parent and the duration of the assignment.

Life is still a day-to-day affair, and I have yet to not cringe when the phone rings at an off hour. But thankfully, Brian is moving forward, and so must I.

Lori Chissie
For those first moments each day when I open my eyes,Before I am fully awake, I am thankfulThose moments before I remember that my life will never be the same.Those moments when I think I need to call JakeAnd even as I remember I still pick up the phone,Just to hear his voice again,Then in the semi darkness, I roll over and close my eyes,Wishing it would all go away,That I could have a do over,A second chance to have a different endingBut there is no different ending.Th
2.

Newland Campbell
Dear Mr. Pease, I was 13 when the first of my friends died because of drugs or alcohol. You lost two sons, something you and your wife never should have to had lived through. While our country was in mourning, you lost a second child. Please do not blame yourself. As a parent, your living son can see how good you are. Be strong, and know Casey and Dave don't want you to be sad on this earth. They are in Heaven and Brian is lucky to have you as a father.
3.

Ann Washburn
I have been working in the Drug/Alcohol field for 30 years and have been sober for 25 years. I grew up with this terrible disease, and also have a 15 year old son who I pray will live through the teenage years. Your story touched me deeply and I respect your sharing. One's story can help so many. God bless you and your family. Ann
4.

Kathy K
{{{Hugs}}} to you and your family. Thank you for sharing your story. I can only hope that life is a bit better for you after all the sorrow you have gone through.Thoughts and prayers to you.
5.

Pam Hearn
I am so very sorry for your loss. You must be a very strong man. I have four sons, and after reading this I thank God that I have them. I can not even begin to imagine your pain. Thank you for sharing it with everyone.
6.

Lois Vanderzanden
I am so so sorry for your loss. I lost a son to murder in 2004 , but couldnt go though losing another child. You are a strong man keep up the good workLois