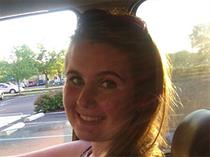 In memory of Brianna Quinn

Thank you most of all for your prayers, for Brianna, and for all of us in this time of frailty. St. Augustine once addressed God…….. “our hearts are restless, until they can find rest in you.”

Anyone who knows Brianna certainly knows she could be restless!!! Her passion, drive for something she set her mind upon, well it went beyond restless to, I dare say, relentless! Each of us, of course, have our own memories of her. Allow me to share three of mine, that I hope will resonate with you and perhaps sync to your own memories of her.

First, Brianna as a child – with her grandmother, Mom, calling “come here Breezy” and Brianna running to her. This was in Flanders New Jersey, her childhood friends Anthony and Nicole. Second, Brianna as an adolescent, Irish Step dance, playing basketball and her being confirmed here at Holy Family. Her Nazareth friends Allisa and Dylan. And wanting to one day somehow work for the Yankees. Which leads to my third remembrance, and, one I will expand upon a bit: Brianna as a Yankee fan.

Of the many Yankee games I attended with Brianna, two stand out. The first involves Johnny Damon. Anyone who ever went to the Stadium with Brianna knows her strong preference was to arrive early – her druthers being to get there before even the players arrived….

One evening, having driven over from Nazareth (early!) we find ourselves in place as the Yankees took infield practice. Next thing I know, Brianna has charmed her way past the usher down to right behind the Yankees dugout. As the players left the field, she would lean over the dugout screaming for an autograph. Most of the players jogged down the steps and blew right by without so much as looking up. So here comes Johnny Damon.

Many of you here today are baseball fans, for those of you who are not, a bit about Johnny. Before joining the Yankees he was with that team in Boston. He was an outfielder who was fast, with decent power and a weak arm. He had long flowing hair (even did a shampoo commercial) and a beard. Since the Yankees have a personal grooming policy, one would never imagine him in pinstripes. Yet he signed a free-agent contract with the arch-rival Yankees, cut his hair, shaved and now roamed centerfield in the Bronx, the hallowed ground once occupied by DiMaggio and Mantle.

Well guess what, as Brianna was practically falling over the dugout, of all the high priced stars, Johnny stops, looks straight at Brianna, smiles, then autographs her shirt and gives her some sweatbands. I have never seen such pure happiness in a person as in Brianna at that moment. Sheer joy. It was a magical, magical moment. Sheer joy.

The other game that stands out – a little less than two years ago. Brianna was home to Pennsylvania after being away, it was early in the season, April. We hadn’t been to a game together in a long time. And this was The Great Mariano’s last year. So we went, hoping for us to see him, in person, close out a game one last time.
Of course in baseball, the circumstances have to be just right for a reliever to even come into a game, especially a closer. Sure enough, 9th inning, Yanks up by one run, the gate in centerfield opens, Sandman starts to play and in he trots.

The game on the line, the first batter reaches base, the buzz in the crowd diminishes for a moment, then quickly two strikes on the next batter, everyone stands, clapping in rhythm – and strike three, next batter, three pitches, same result. Now two out, bottom of the ninth, one run game, runner on first, Riviera on the mound -exactly why we were there, the pitch, a broken bat ground ball back to the mound, he fields it, jogs a bit toward first, tossed the ball and another save for the Great one. And pure joy, once again all over Brianna’s face. We hugged and jumped up and down over and over like two kids on Christmas morning. So happy.

Julie
Thank you for sharing this with us. I'm so sorry for your loss.
2.

AddictionMyth
What a tragic loss. In my opinion it demonstrates the dangers of 'treatment' that teaches these kids they have a 'disease'. No, they don't. Though the belief itself can be deadly.