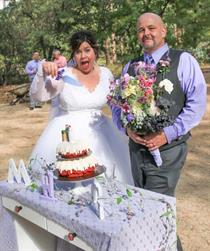 My big brother and his demon

My big brother and his demon

I have two big brothers who are much older then I am. My brother Mikey has been addicted to drugs and alcohol for my whole life (pot, opiates and heroin). I've never known him sober until January 2012. Our dad left when I was 3 years old and Mikey became more like a dad towards me than a brother. He was the one who read stories to me at night and took me fishing and swimming and to the beach.

But it wasn't all nice and fun in the house. Even being little it was obvious Mikey was the source of all the hullabaloo and fighting. He had a very difficult journey through life. He has tried to get sober so many times, would do great for a month or a few months but one problem would happen and he used it to start using again. I started to have resentment towards him because he was causing so much turmoil in the family. He was always causing fights btw family members and he thought it was funny. He had to have emergency surgery to save his arm bc he kept shooting up in the same vein, it became gangrenous, and then he got septic and he had a large portion of his antecube cut out or he would have lost his arm.

I didn't understand how he let that happen? My brother is smart and not just book smart, street smart too. Later on, once he was sober, he said the drug was more powerful than his care for his arm!! He said if it was taking too long to find a vein he just went there despite his knowledge that he was doing something bad! And if anyone brought up his addiction he would get angry and run off for months, he would usually contact someone right as winter started because he didn't want to sleep in a tent in the snow. I remember my mom would be a wreck because he didn't call and back then cell phones didn't exist! He started using at age 12 (according to my mom b/c I wasn't born yet) and finally found his recovery at 40. I was 28 and when I saw him Christmas of 2012 I broke down crying because I was so happy and so proud of him. I had never in my 28 years of existence seen him look "happy" to be clean and sober! All the other times he tried, he said his heart wasn't as committed as his brain! And he knew he always had someone to fall back on if he used.

And he was right. We ALL enabled him. Not knowing we were hindering his recovery. And he had to get out of his familiar area. He said he had to sever ties with the whole place where he was living or he would have been sucked back in.

This last year I had the privilege to attend Mikey's wedding to my new awesome sister-in-law! I never thought I'd get to see him happy. When I was in college I had extra money in a savings account because I thought it wouldn't be too long before I would get the call saying my brother OD'ed and I'd have to buy a plane ticket. I have to say it was great to use that money for a different reason!

Don't ever do that and don't ever give up on your family member or friend. They're going to yell at you, call you things that are going to hurt you deeply but that's not them...it's their demon, the drug is powerful and it wants to take your loved one from you. Don't listen to it! And my mom always says that she wishes she had more knowledge about drug addiction when he was a minor so she could have gotten him out of the area and into a rehab and recovery program. I urge parents to listen to your little voice if you think your teen is starting to use, be intrusive! Get into the cell phone and email and Facebook private messages and check "recently deleted" folders on their phones and tablets etc. And randomly. It's not invading privacy, you're being a parent. You're not a friend. Don't worry, you'll be friends when they are 30!

So now that my brother hit his 5 year sobriety, he has a career, he's married and I can say that he's genuinely happy. He has his moments but who doesn't? The difference now is he doesn't use the bad day as an excuse to relapse. There is ALWAYS HOPE! NEVER GIVE UP ON YOUR SOBRIETY! Because your drug is not giving up on trying to kill you!

Julie
Thank you for sharing your story with us, Lori. Congrats on your brother's recovery -- and his wedding, career and good health. Wishing all the best to you and your family!
2.

Julie
Thank you for sharing your story with us, Lori. Congrats on your brother's recovery -- and his wedding, career and good health. Wishing all the best to you and your family!