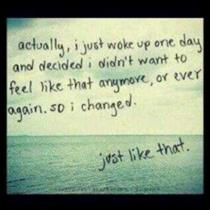 My Story of Inner-Strength & Victory

My Story of Inner-Strength & Victory

Perseverance and self-discipline.
After approximately 8 or 9 years of drinking anywhere from 6-12 beers 4 or 5 days a week, I realized I could no longer do this to myself and that I had a problem. People had said to me, "Every time I see you, you always have a beer in your hand."?One night, while watching (ironically) the TV show Intervention, I looked at the beer I was drinking and said out loud, "I have a problem and I have to get a hold of it."
After saying it out loud, which I feel I had to say, all the evidence started flooding in to my memory. Nights where the little voice in my head said, "I want one more" or "I want more so stop and pick up a case" and I gave in without a fight and drank more. Times when I sat alone after driving home drunk, not remembering the drive and praying, Thank you?Lord?for getting me home safely and not harming or killing someone." Sitting at home watching TV or doing work and drinking to the point I stagger to bed with a full beer. Sitting that beer on my headboard and not allowing myself to pass out till that beer was empty regardless of how late it was. Waking up hungover and trudging through work that day where I work educating adolescents about drugs and alcohol...the guilt of knowing I was such a hypocrite when I told them about the dangers of alcohol. I knew something had to change...I had to change. So I did.
For twenty-three years, I traveled all over Ohio and the United States playing softball and what came with softball was beer. I drank during tournaments. I drank after tournaments. We all did, so alcohol was always around and being offered. After all these years, I realized that my love for the game had diminished and that getting a hold of my dependency on alcohol meant withdrawing from the softball community, which I was fine with. I had to change. So I did.
When I started waking up without a hangover, I realized that things were much better. My mind wasn't occupied with "Do I have enough money to buy beer?" anymore. I started running and before I realized I had lost 25 lbs and really enjoyed the feeling of endorphins created from exercising more than the feeling of drunkenness. I still play softball one night a week and at first when?I declined the offer of a beer people were taken back. Now, after two sober seasons, they are not surprised. There are still offers, but usually someone says, "She doesn't hardly drink anymore."
So to say I've stopped completely would be misleading.?Maybe once a month or two I have one or two beers, but no more and it's usually with dinner and friends. The little voice still rears its ugly head and tells me, "Have another one," but I tell it no and take pride in shutting it up by stopping. Conversely, I feel just as confident and proud to order water or soda in those situations as well (internally I beam with pride when I order a beverage that does not have alcohol in it.)
So is the craving still there? Yes, but I control it. I know that if I let it control me, it will, so I don't let it. I do share some of my story with the adolescents I work with but not all of it, as I have not shared all the details of the depths of my addiction with you. There's no need.
Instead, I share it as a story of personal inner-strength and victory. I am very proud of my victory to take back control of myself. I feel like I can persevere over anything I really put my mind to. I did this all on my own, no help, no counselling and I'm damn proud.
I had to change and I did.

Megan Fritz
Congratulations on 3 years in recovery! Thank you for sharing your story with us!
2.

Julie
Congratulations, Jenn Ann -- thank you so much for sharing your story with us!
3.

Megan Fritz
Congratulations on 3 years in recovery! Thank you for sharing your story with us!
4.

Julie
Congratulations, Jenn Ann -- thank you so much for sharing your story with us!