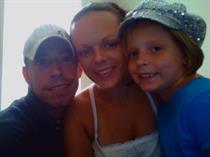 My Story of How I Got My Life Back!!

My Story of How I Got My Life Back!!

Hi my name is Shari. I have had a rough life mostly caused by my own addiction. I was abused as a child and then my father died at 13. That is when I began using drugs and alcohol.
At 17 I had my 1st child Sam. I went on the straight and narrow for a year then his dad started beating the hell out of me all the time. I finally left him and started using again. I just didn't know how to handle a baby and his dad stalking me.
I ended up getting cancer at 21 had surgery and then had my daughter Kaitlyn at 23. Right after I had her, I found out my cancer was back and was prescribed pain medication. Well it was all down hill from there.
I started going to pill mills in Florida and risking my life behind bars on some really dumb shit.  In 2010 I had gotten cancer the final time and had a hysterectomy and lost my job, lost my house and lost my son.
I started using heroin -- oh my life really went to shit then. Starting hurting everyone around me stealing, lying, manipulating everyone and anyone I could. By 2012 my addiction was so bad I was homeless with my daughter. My family wouldn't speak to me. I had no one but my friend from high school who I lived with but she had the same addiction as me so we used together, stole together, did everything together.
I met my now husband online and I wasn't looking for anything serious but it happened. He came to town to pick me up for the weekend and we had my daughter and his 3 oldest with us and had stopped to eat at McDonald's. I sent them to get the food and ran into the bathroom so I could use. That was the last thing I remember.  I woke up with paramedics around me asking me stupid questions and they told me that I had overdosed and if there wasn't a doctor eating there that I would have been dead because they wouldn't have gotten to me in time.  I was so  my now husband had no idea I was a junkie.  I ended up going to the hospital with my daughter. He was no where to be found. I thought he was gone.
At the hospital, child services took my daughter. So forever 01/29/2013 will be burned into my mind of me officially losing everything -- my kids, my life, my car, my house, my job. Two days later my now husband called me. I was shocked.  He had a lot of questions and I lied and said I had quit.  He asked me to marry him but I had to leave where I was living or stay there and rot.  I had wanted to quit for some time but didn't know how.  He found me a rehab to go to and I jumped on the chance to get clean. I went into rehab 2/27/2013 and haven't looked back.
We got married only 3 days after I had gotten sober and we are still together. Happy I got my kids back and a great job which I just got a raise yesterday and a promotion.  Life is so much better. I go to meetings and have met some awesome people. I have 18 months and 3 days. I feel awesome and I love that I can be the mother, wife and daughter that all the people in my life deserve.  I used to be a hopeless dope fiend now I'm a dopeless hope fiend.

Rob
What a sham. I was only use as a source to get off of drugs through my insurance. Almost as bad as a drug dealer providing for the user. Without the insurance for the medication that's just as bad to get off of she would still be using or worse! I guess we will see in another month when open enrollment comes in June. Never loved, Only used The husband
2.

Julie
"Dopeless hope fiend" -- I love it. Congrats, Shari, on two years today. And thank you for sharing your amazing story with us.