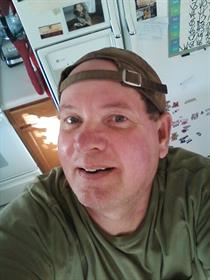 My story begins in Elgin, Illinois. Born the forth child to a workaholic father and an alcholic mother. Abused at the hands of my mother I grew up self-loathing. At age 13 Both my parents died. I found myself very much alone. I lived with my brother who I hardly knew. I was coming into manhood with nowhere to turn.

Before my parents' death, I felt the different feelings you hear from people who found themselves struggling with being Gay. So now I face adolesence with grieving and inner termoil. Back in the 60s a person pretty much stayed in the closet. At 16 I found alcohol eased this pain. So much I didn't seem to care what happened. At school I kept a bottle of vodka in my car. my friend and I would go out into the parking lot to drink our troubles away. By 18 I still was sexually struggling, but finding new and better ways to mask the pain. I met with friends before and after school to smoke pot, and drink. By the time I graduated I decided that beer and pot were my friends. To mask the fact I was a Gay man, I got married to a girl from school. We had a child after five years of marriage. This marriage was destined for divorce court. And after eight years?it happened. But the relief was so good.

I soon found a new demon in my life. Cocaine was on the scene in the 1980s. I felt great, working hard, playing hard and becoming increasingly sicker. Friday night started the party which ended on Sunday where I felt terrible and now I was broke for another week. In 1986 I found myself missing out on life. I went on with one of my bindges but now I'm not remembering the weekend. I drank, smoked pot, and took coke. One morning I awoke to terrible stomach cramps. The day went on and I became sicker. After a week of being sick, and not able to use my addiction or it's effects. I found a friend who I could talk to. I told him about my miserable life and he asked if I would join him at an AA meeting. I was 33 and tired. I started going to meetings and found I was much happier then ever before. I was meeting people who were telling me their story But I found they had the same ring as my own. I was able to face the biggest demon, that was me.

Today I like myself. I'm a Gay man proud of it. I never looked back and at age 60, I love life more than ever. I love working with young people showing that they need to like themselves and that nothing is so bad you need to run from it. Instead embrace addversity, learn to make it strengthen you. As for the Demons, I just smile and say GoodNight.